by lady ada
This mini tutorial will show you how you can find and uninstall all those extra COM ports you may have registered from years of microcontroller-hacking.

You may have noticed that every time a new FTDI-based board is plugged in, you get a new COM port. You might also get new COM port assignment with adapters, etc. Eventually you can get into pretty high COM port numbers and that can be really annoying! For example, on my 6-month old Windows 7 install I'm already up to COM38! 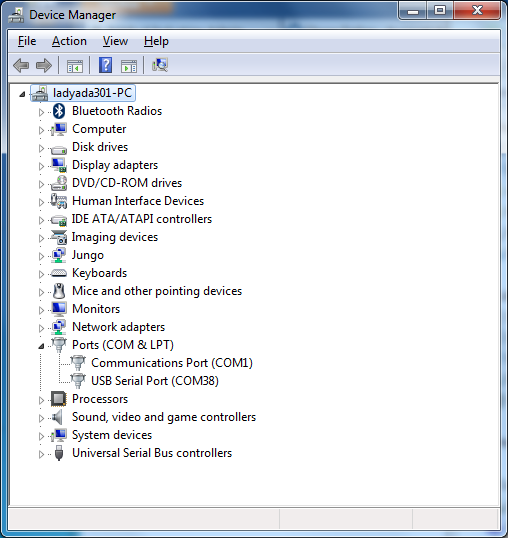 At some point you may want to figure out what were all those other COM ports and perhaps uninstall the "ghost" devices. Under windows this isn't particularly easy unless you know how. Luckily, this tutorial will show you how and its really easy once you know!

First up, you'll have to open up a Command Prompt and in Windows 7 it has to be run as administrator. Open up the start menu and start typing in "Command" until the black C:\ icon appears. Right click and select Run as Administrator If you have some other version of Windows, you may not have to run as admin.

Now type in set devmgr_show_nonpresent_devices=1 (which is the magic command to show ghost devices) followed by start devmgmt.msc (which starts up the device manager) 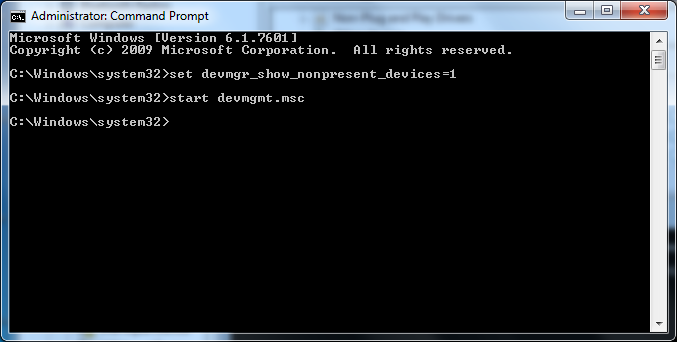 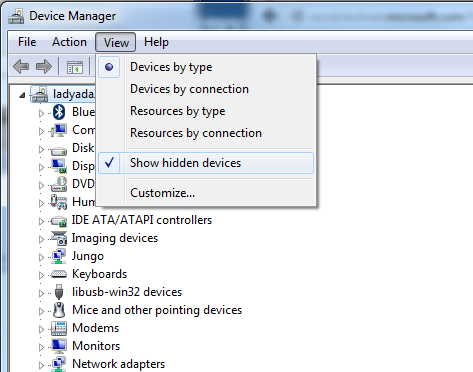 Voila! You can now see every COM port you've ever made, and you can also now select which ones you want to uninstall so the COM port number can be recycled 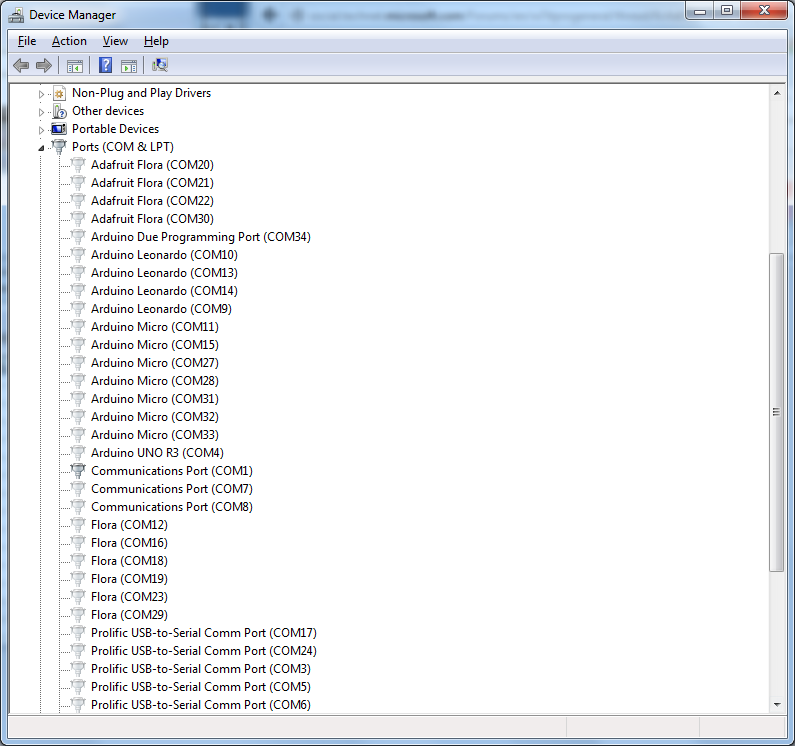 
I posted this on a FB page which may delete it, saving it here since i typed it all out.


Related to what I think was a Discwasher polonium static zapper, which worked great by using alpha particles to kill static.

I think Discwasher also made a static zapper too. If so got a fun story for you.

A friend who worked for the spooks processing film in a portable lab for a certain high speed airplane observed that there was a huge problem with fogging and damage to the film.

the film was something like 16" wide, I think (look up the SR-71 cameras, it's there). A very tightly wound spool quite large in diameter taken during the flight by the cameras on board.

When they would develop the film there were blotches, which were traced by these guys to static sparks from when the film was unwound.

With the agency as with any organization the hive mind of the agency had engineers and meetings and all sorts of crap going on, but in the mean time he was processing film and could clearly see sparks in the trailer.

No hive mind folks in site, just meetings there.

He heard about the static zapper for records, and took it on himself to get a couple and after some bailing wire and tape installed them in the processing spot so they were aimed at the sport where the film separated from the roll. A lot of the fogging went away, and the people up the food chain, the analysts, and other people were find.

Noone tells the hive mind and their meetings, but the word got around what fixed it and soon a lot of crews have the bailing wire and Static killers (I think Discwasher gizmos) installed and are happy.

What happened was at some point they packed up and went to move one of the processing labs which were in 20' containers which were broken up and moved as needed. But most of the bases were long term, at places such as Guam, Nellis and a few other spots you can find iin the stories.

Somehow one of the moves went thru a checkpoint which sniffed for hazards, and all sorts of alarms and panic ensue. My buddy wasn't around, but after the source was found to be these bits of polonium in the anti static gizmos eventually they came round and put him on the spot.

Finally all the useful parties got together, and my buy who was agency was given a talking to, and things went along, presumable with propery build $3000 anti static units instead of a couple of $20 discwashers and tape and bailing wire.

****************
BTW if anyone has any of the original antistatic zappers, I think the half life of the isotope is run, and they won't do much, but will be hazardous chemically, and as bad as you hear in the news to ingest by accident.

The ones I recall were Polonium, because the anti static effect was from the alpha particles, which decayed into helium gas atoms taking electrons from the static along with them

Take them to a hazmat disposal site if you find one in your grandfathers stereo pile and explain to the hazmat folks what you have.

If kept intact and out of prying hands they are not particularly dangerous, but what they are and what they contain may not be that obvious 40 years later.

"Get Steve Chase waxing melodic about the evolution of the recording industry and in particular, vinyl records, and his eyes glimmer with the acuity of a diamond stylus. The gushing enthusiasm for his musical pastime and his company, GrooveWasher, is tempered only by a 35-year career in the banking industry: measured passion.
Following a path part legacy and part cliché, Steve birthed GrooveWasher in his garage. Its roots track back to record albums’ halcyon days of the late 1960s. He credits his early relationship with Bruce Maier, PhD, in Columbia, MO for GrooveWasher’s origins. “He was an avid audiophile and professor of microbiology,” Chase says. “He introduced me to high-end audio and it was about three years later that (Maier) started the Discwasher company.”"

Some info from another site on the serial ports.

On the BeagleBone Black, it’s only the /dev/ttyO0 that is enabled by default, and it is coupled to the serial console. The other serial ports must be enabled before they can be used.

There is useful information about the serial ports of the BeagleBone in this link 2.


The BeagleBone Black Wireless is Bluetooth 4.1 compatible which is normally compatible with Bluetooth 4.0. Therefore, you should be able to use this 4.0 Bluetooth BLE Link Bee 1 with the SSC32.

video with some app, maybe for below link


From FAQ for BBB boards.
https://github.com/beagleboard/beaglebone-blue/wiki/Frequently-Asked-Questions-(FAQ)

Using Beaglebone blue board instructions for setting up wifi.

FAQ copy is missing a newline, and the agent on step isn't apparent.

The beaglbone black wireless has an accesspoint in control of the wifi, and active..

This is the process to connect to the board via the access point.  This will complicate work if there isn't another NIC on the connecting computer, since there will be no internet present from the BBB once connected.

SSID: BeagleBone-XXXX where XXXX is based upon the board's assigned unique hardware address
Password: BeagleBone

run command with sudo with piping.


You can invoke a new shell as root:
You could also just elevate a process to write to the file: